How it all began

In order to understand the history of our Society it is necessary to look at the historical background, particularly the situation in Germany at the time, and the life of our founder Fr Francis Jordan.

There were two important factors which affected the Church during the 19th century in Germany: Secularisation and the Kulturkampf. At the beginning of the century under Napoleon nearly all the monasteries in Germany were secularised. The monasteries were dissolved and the property taken over by the state or sold off. The whole way in which the Church exercised its pastoral care was disrupted, and a previously flourishing monastic culture was destroyed. The Prussian State, which had become stronger and stronger in the course of the 19th century, embarked on a policy of conflict with the Catholic Church known as the Kulturkampf. Laws were introduced to try and limit the power and influence of the Church. Because of that, the Church found many of its practical and pastoral activities increasingly restricted by the state.

It was not, at first, the intention of Father Jordan to found a Religious Order. He wanted to reverse the effects of the Kulturkampf and this meant something really quite radical and wide ranging; it would mean literally renewing the whole Church. It was his aim to give Christ back to the ordinary people. He was seized with an extraordinary missionary enthusiasm. It was an all-consuming passion; his love for God and for humanity overwhelmed him and he wanted to set to work immediately and do whatever he could think of to realise his ambitions there and then.

First he had to find some associates, people who would understand and help him in his task, and most importantly he was looking for priests who would be able to take up his plan. He soon found Father Bonaventura Lüthen, a fellow German, who in those early days became his closest collaborator and friend. He soon found several other priests who were prepared to work with him.

Jordan’s plan was for a Society with three degrees: the First Degree would include members, both men and women, who would devote themselves entirely to the Society and its work. They would take the vows of poverty, chastity and obedience. The Second Degree would include educated people i.e. those who would be able to exercise an influence in the Church and in Society—scientists, artists, intellectuals, journalists, etc. The Third Degree was for anyone who was willing to live a good Christian life and to promote the aims of the Society.

It was very important for Father Jordan that his Society should be established in Rome, for this was the heart of the Church, so he moved to the house of St Brigida in Piazza Farnese, where he established a printing press and started printing the monthly magazine Der Missionär. On the 8th December 1881, in the Chapel of St Brigida in Rome, Father Jordan and three other priests took private vows as members of the Apostolic Teaching Society. It is this date which is kept as the foundation day of the Salvatorians.

The Apostolic Teaching Society soon attracted other collaborators and the premises in St Brigida became too small. So Fr Jordan was delighted to be able to rent rooms right next to St Peter’s Piazza in the Palazzo Moroni, Borgo Vecchio 165—now Via della Conciliazione 51.

The plans for involving Diocesan priests did not materialize, but the Motherhouse was soon filled with prospective candidates. His idea of a Society with three grades was considered too progressive. The Church would only give recognition to the First Grade organised along the lines of a Religious Order with completely separate branches for women and men.

The name ‘Apostolic Teaching Society’ was considered rather controversial since the Papacy reserved the use of the title Apostolic for itself. 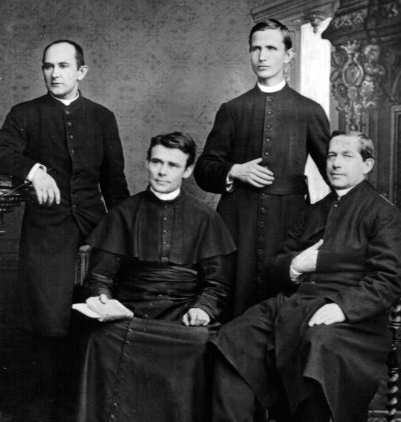 The name was changed to ‘The Catholic Teaching Society’, then to ‘The Society of the Divine Saviour’ (in Latin: Societas Divini Salvatoris) and ever since then the Society has been known as “The Salvatorians”. This change of name was fortunate because the new Society no longer took its name from its activities but from its highest ideal: Christ himself, the Saviour of the World. He is our model and it is to him that we aim to draw others.

Jordan was from the beginning keen to involve women in the work of the Society. He established a foundation of Sisters under the leadership of Francesca Streitel, but difficulties soon arose. It seemed that she was not in full harmony with the ideas of the Founder and wanted the Sisters to follow the lines of Franciscans of the Strict Observance. This group of Sisters was separated from Father Jordan in 1886 and remains today as the Adolorata Sisters.

Jordan had long connection with Therese von Wüllenweber, who had been a member of the First Degree since 1882, and was waiting for him to call her to Rome. She came in 1888 and Jordan placed her in charge of the new foundation in Tivoli: The Sisters of the Divine Saviour. Therese took the name ‘Mary of the Apostles’, a name which shows her devotion to the apostolic spirit of Jordan’s ideas. In fact, they had a remarkable similarity of outlook, and she proved to be a faithful collaborator and a wise superior of the Sisters. She was beatified in 1968. 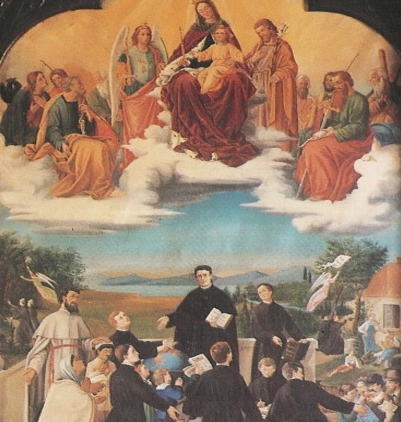 Once the canonical approbation for the Society was obtained Jordan began energetically to found a series of new houses of the Society. It is only possible to give a summary here. A big uplift was given to the Salvatorians when the Congregation for the Propagation of the Faith asked Father Jordan if he would take charge of a vast new mission area in Assam, North East India. As early as 1890 he sent his first missionaries to Assam, even though he could hardly spare the men. In 1892 he started foundations in the United States and Austria. There followed: Ecuador-Colombia (1893), Switzerland (1894), Czechoslovakia (1895), Brazil (1896), Romania (1898), Belgium, Poland and Yugoslavia (1900), England (1901) and Germany (1915). So during his lifetime Father Jordan established the Society in 14 different countries. This was indeed the result of tireless activity and very many long journeys by him.

Since then our Society has spread throughout the world with 3000 members (priests, brothers and sisters) proclaiming Jesus Christ as the only Saviour of the world.